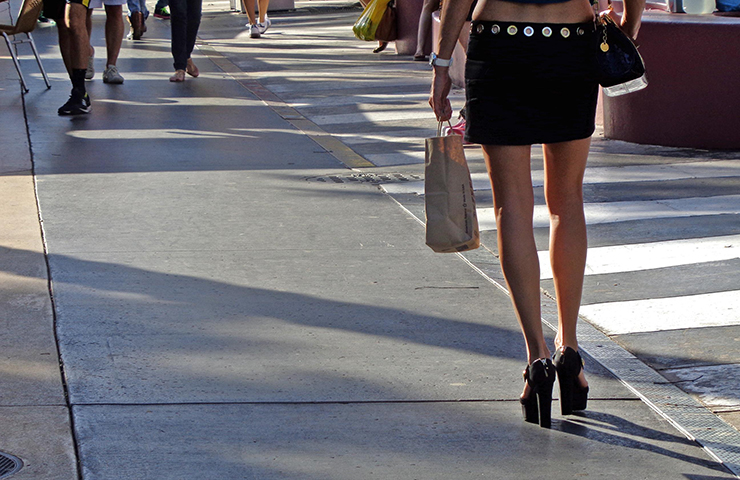 Confessions of a Reformed Brazen Hussy

Imagine the scariest roller coaster in the world, the kind that takes you super high and then plummets at top speed two seconds later. As you climb to the top, the hair on the back of your neck stands up and your stomach ties up in knots. When you drop, your whole body fills with abject fear, and as you coast to the next climb, you fell depleted, your body in shock, yet oddly filled with anticipation for the next theme park-induced high.

In my teens and early 20s, this was exactly what dating felt like. Roller coasters are often used as a metaphor for marriage, the natural ups and downs, feeling nervous and exhilarated at the same time. For me, the daily roller coaster ride was petrifying, exhausting, and unhealthy.

I’ll be honest… my life was a revolving door of boyfriends. As much as I hate to admit it, I was one of “those girls.” We all have a girlfriend or sister like that, the one who can’t be happy without a man, preferably a new man; the girl that seems to have no self respect or personal boundaries, who will jump into a relationship with pretty much anyone who says what she wants to hear.

I was addicted to having a man in my life, to feeling special and wanted, to what I thought was love. I figured the root cause was growing up without a father, and always longing for male approval. I found out later it was far more serious than that. I fell hard and fast every time, with no thought given to the type of man I was falling for. It’s no surprise that I hooked up with some real losers that any emotionally balanced and secure woman would avoid like the plague. One ex even threatened to have me kidnapped and sold into white slavery!

Once in a relationship, if he didn’t call after a date, I was sure he hated me or I had done something horribly wrong. Obsessively I’d go over every moment of the previous evening to see if I could have done something better. Alternately, if he looked at me with longing over dinner, I would run right out the next day and start trying on wedding dresses, certain we would be together forever. My life was swinging from one extreme to another, always looking for that “high” feeling of falling in love, and always crashing in flames.

Just before my dating life passed the point of no return and entered the realm of The Jerry Springer Show, a miracle happened. I was in a car accident that injured my spine. It’s not what you think, either. I didn’t see the “light” or see the enormity of life and how short it was. None of that. But I did end up in Dr. Michael DeFino’s chiropractic office, the man I credit with saving my life.

In addition to treatments for my back, he tested me for food allergies. Turned out I was allergic to – get ready now – chocolate, sugar, milk, wheat, corn, and potatoes! What else is there, right? Oh, and coffee. Yup. Life was OVER. All my good stuff, the food that kick started my day and helped me wind down, all forbidden fruit now. The treats that nursed my broken heart and quieted my nerves forever out of reach. Who would have thought the foods that I used to help me forget woes and lick my wounds were causing the problem in the first place.

Dr. DeFino told me my food allergies were causing hormonal and chemical fluctuations that caused me to feel extreme emotions. I didn’t immediately make the connection between ice cream and breakups, but I was desperate so I decided to give it a go. I quit cold turkey, and after a two-week period of shock (and grief), the impossible happened. I was calm. I was centered. I was, in fact, happy.

Cutting out sugar, caffeine, chocolate, bread, and the other stuff gave me energy, evened out my moods, and improved my concentration. And the little things that used to set me off into a tailspin or a rageful rant? I just let them pass on by. It was like being reborn and seeing the world through a child’s eyes. My relationships with friends improved almost immediately, and those that were toxic, I let go of easily. Gone was the drama, and in its place was something that had eluded me all of my life: serenity.

When I see the twenty-somethings that end up on the cover of gossip magazines every week, bouncing from guy to guy like a tennis ball, I remember my own roller coaster ride. On cloud nine one day, devastated the next. Standing in the grocery store checkout, I wonder if any these girls have been checked for food allergies! When Brittany hit rock bottom I knew it was more than the stress and pressure of being in the limelight 24/7. I saw in her the tailspin that would have been my life, only ending far worse than rehab.

It seems like such a simple solution, and yet we suffer through our emotional highs and lows, thinking this is just “who we are.” How many other people go through life feeling like they are crazy, but are such good actors that no-one knows but them? It’s a pretty isolating feeling. If only doctors would test for emotional hypersensitivities before putting those people on drugs. It’s worth a try, and the results could be miraculous.

The woman I was then is so far removed from my life now, I can’t believe we inhabited the same body. But I guess in a way, we didn’t. My former body was out of balance, burdened with chemicals and food that caused extreme reactions. Off of the “bad stuff” my body is exactly as it should be; calm and healthy.

Today, I am happily married to a wonderful man, my perfect fit. We have a four-year-old son and a remarkable relationship based on trust, passion, and friendship. You won’t believe me, but we’ve never had a fight. For someone who used to fly off the handle for absolutely no good reason, this is some feat.

I often wonder where I’d be had I not been in that car accident nearly 20 years ago. The sad truth is that had I remained uninformed and unhealthy in my body (and consequently my mind), I would have let my true love slip through my fingers. In fact, I probably wouldn’t have even noticed him, too busy riding up and down at break neck speed with the latest bad boy in a string of poor choices. Sometimes, the answer to our biggest challenge is simple, like changing how and what we eat. Everyone can do that. You can do that. I did, and I’ve been living joyously ever since.

The life I am living now is one that in my 20s I could not even dream up, let alone hope for. Today, I ride the real roller coasters for fun. I buy my ticket, find a seat, have a thrill, and take comfort in the fact that in two minutes, I can get off the ride and hit the carousel.

Tags self confidence self esteem

Founder of blockchain dating app Loly (loly.io). Always one to stay on the bleeding edge of what’s next, she also advises on ICO launches of new crypto projects to find the best methods to attract the right users. Her brand is a blend of tech/social/celebrity with a little philanthropy thrown in for good measure. Add to her personality a treasure trove of high tech skills, a degree in sex ed, a few dozen awards in the entertainment industry, and you have a combination that understands the pulse of the industry and how to adapt to the ever changing landscape.
@http://twitter.com/adryenn
Previous How to Keep Seniors From Falling for a Scam
Next Jack Canfield on How to Attract Abundance